The fascination of polar bears has brought me back to the Wat'chee lodge near Wapusk National Park, about 60 kilometers south of Churchill at the Hudson Bay in Canada. There, where icy winds create temperatures down to minus 50° Celsius polar bear mothers dig themselve winter dens to give birth to their cubs. In March, when the little polar bears are 3 months old, they come out of the caves to make the long journey to the sea, as they are desperate to feed after the long fast.
Like in 2012 it was difficult to photograph them. During nine days I could only see one mother with a single cub. She was extremely shy and showed up only for a total of maybe 15 minutes! But the light was spectacular and dramatic. The cub however was very cooperative and came out of the den quite often. Despite a tedious trip (three days with a blizzard to get there... and two days with a blizzard to get back  ...) it was worth it. A unique and emotional experience.

Surprised, that people are waiting, the mother comes out of the den after 6 months and shakes the snow from her fur. The evening backlight makes for a spectacular effect. 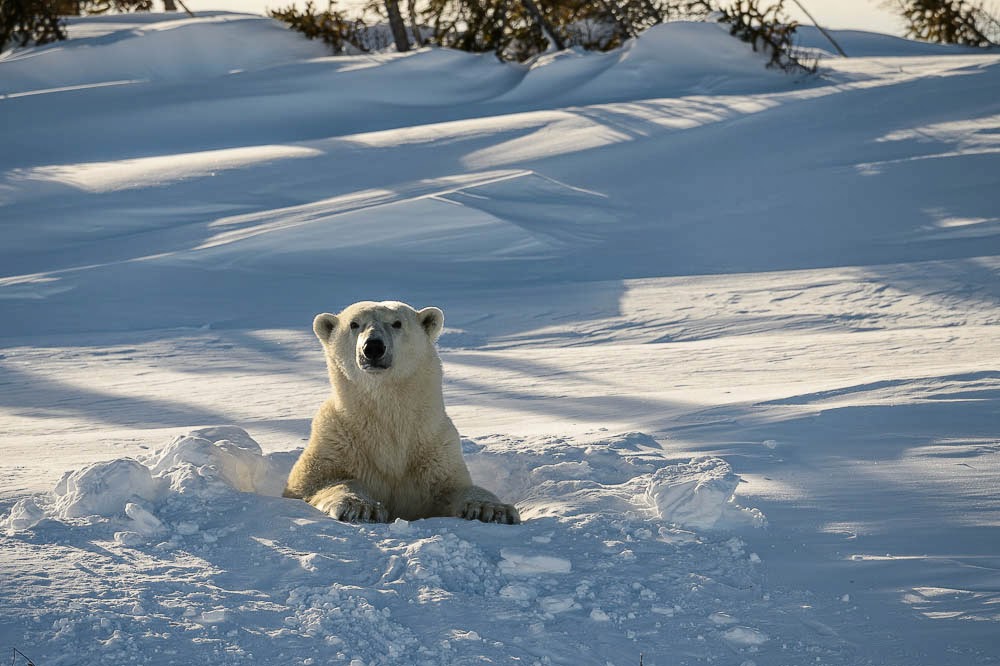 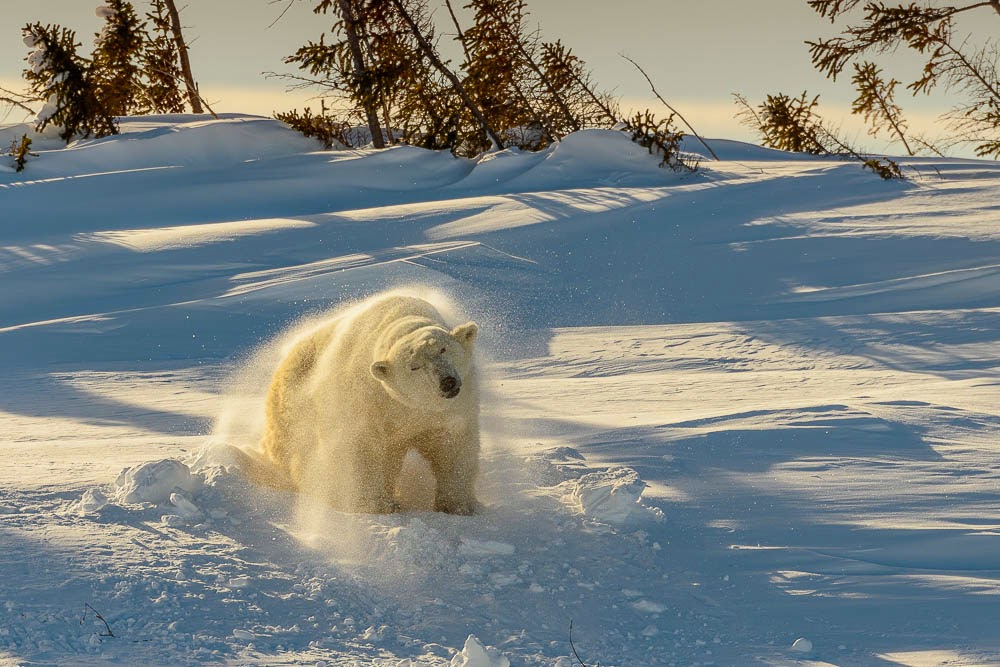 Soon follows the cub and sees daylight for the first time in his life. An emotional moment that touched me deeply. Not very often people can witness and photograph this very moment. 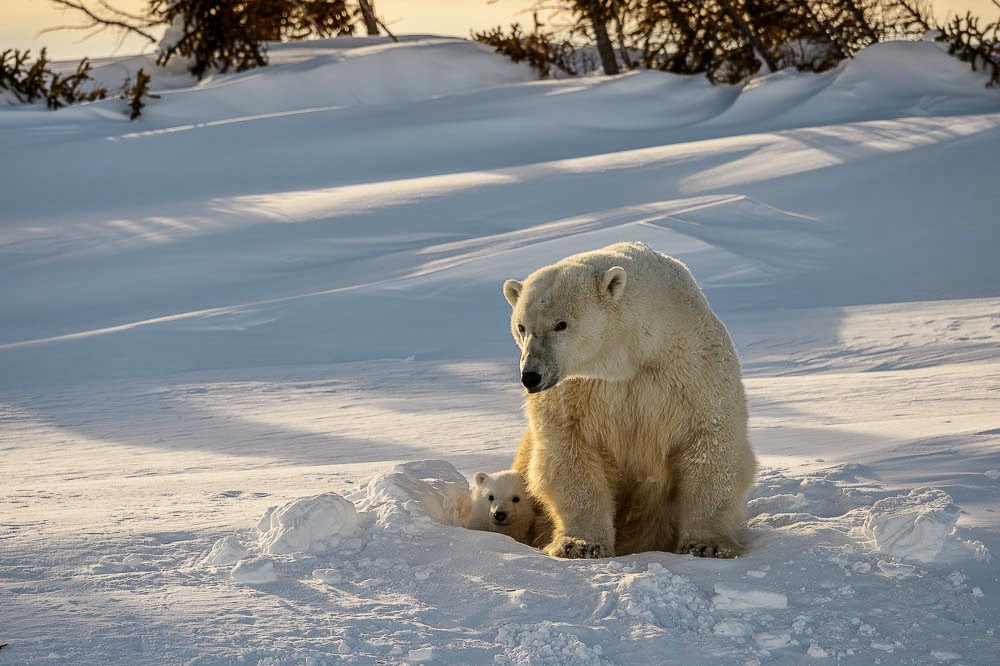 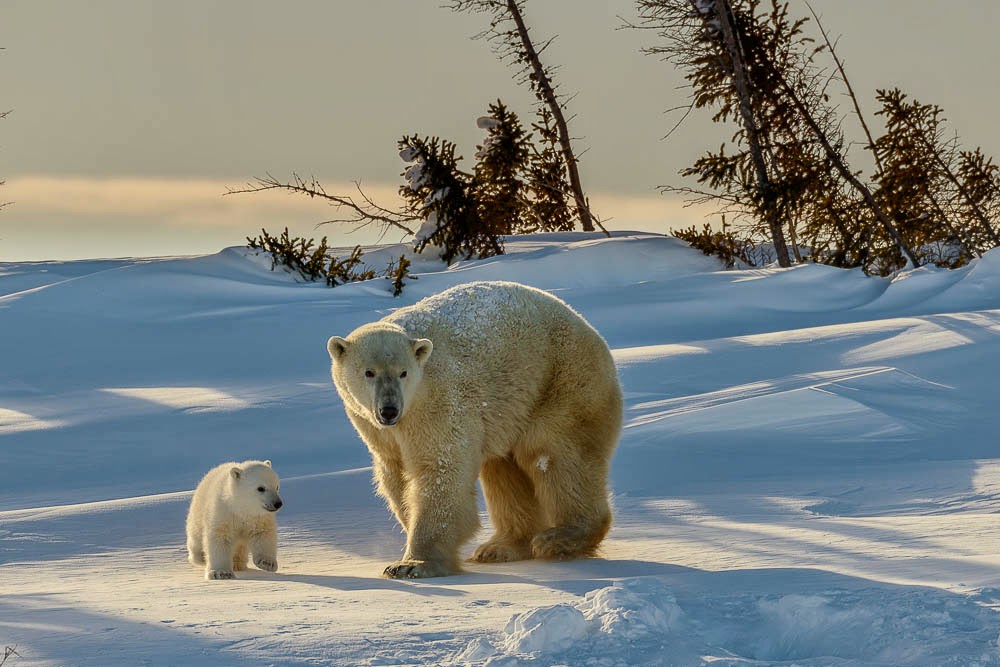 Before making the way to the sea, the mother digs, to our surprise, at a distance of about a kilometer a new snow den. There they remain for almost a week before she sets out on an early morning. She rarely shows up while we are there. The cub however plays outside quite often - much to our delight. With my new Nikon 800mm lens I am able to capture images with almost incredible sharpness. 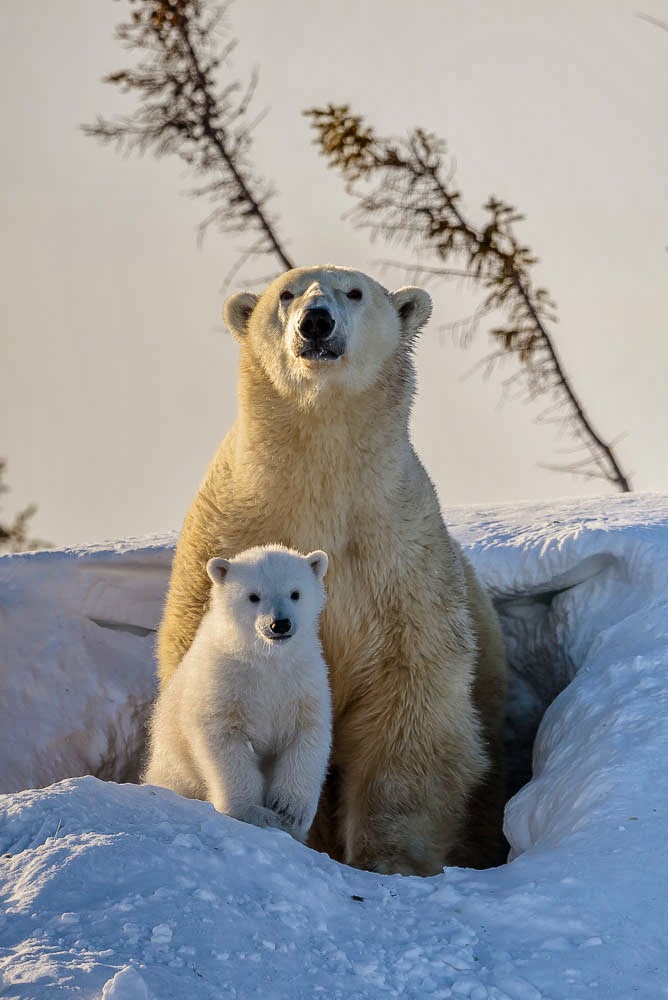 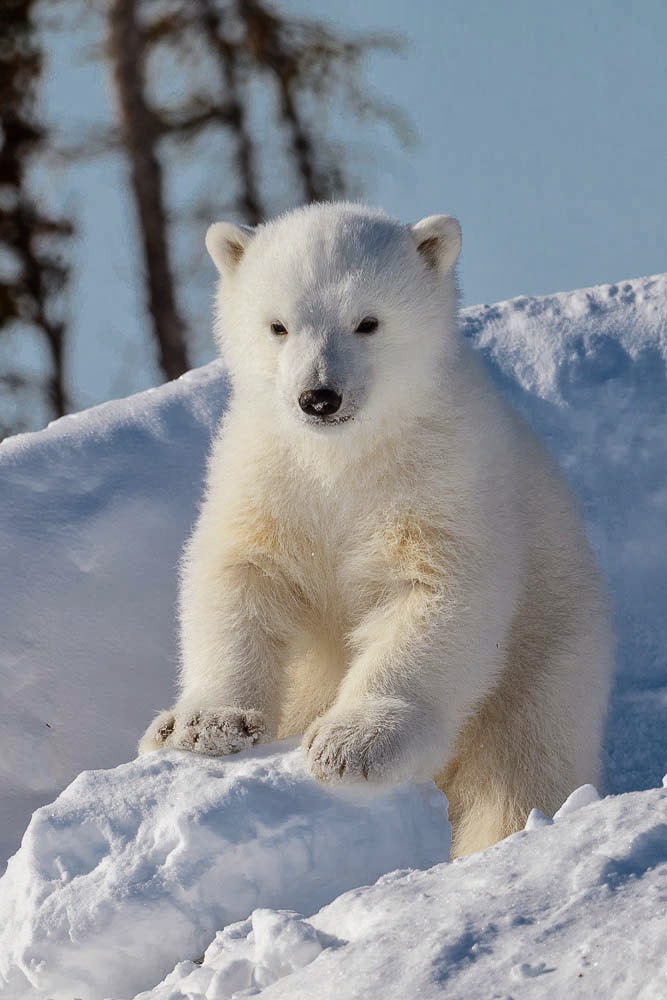 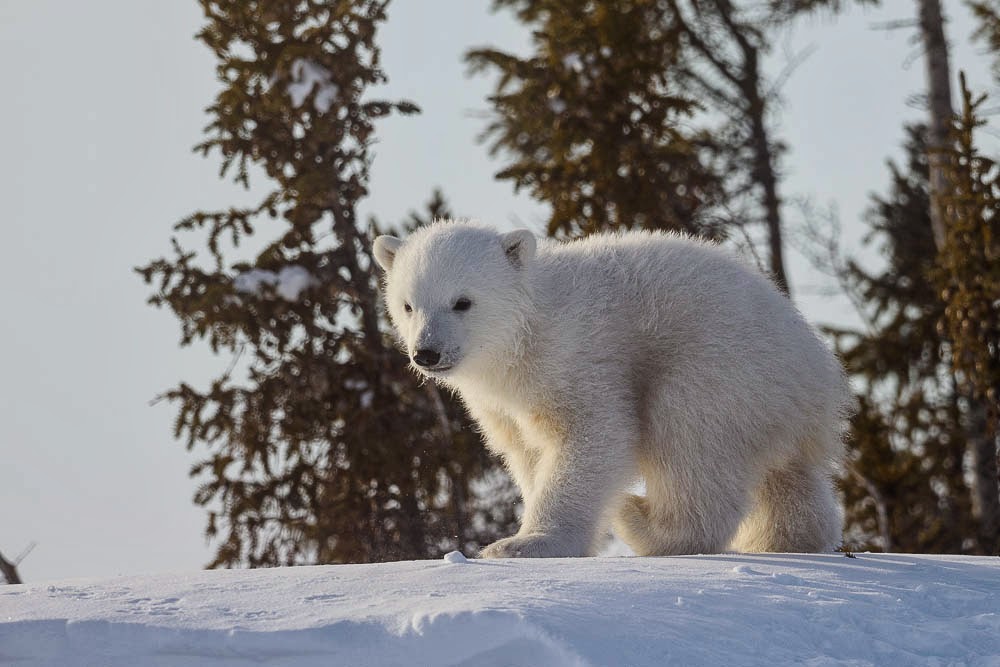 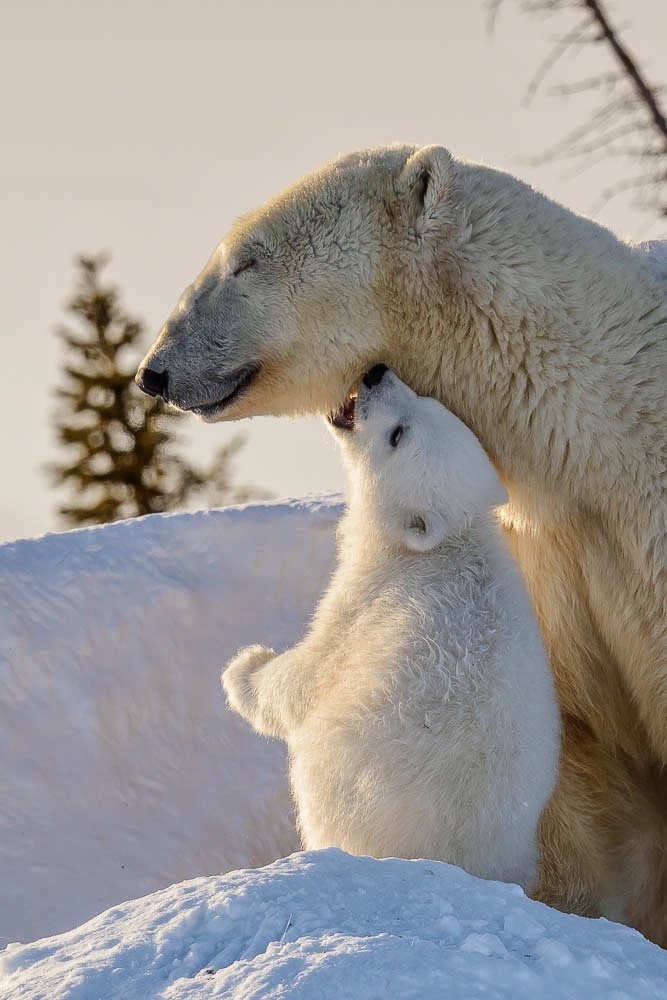 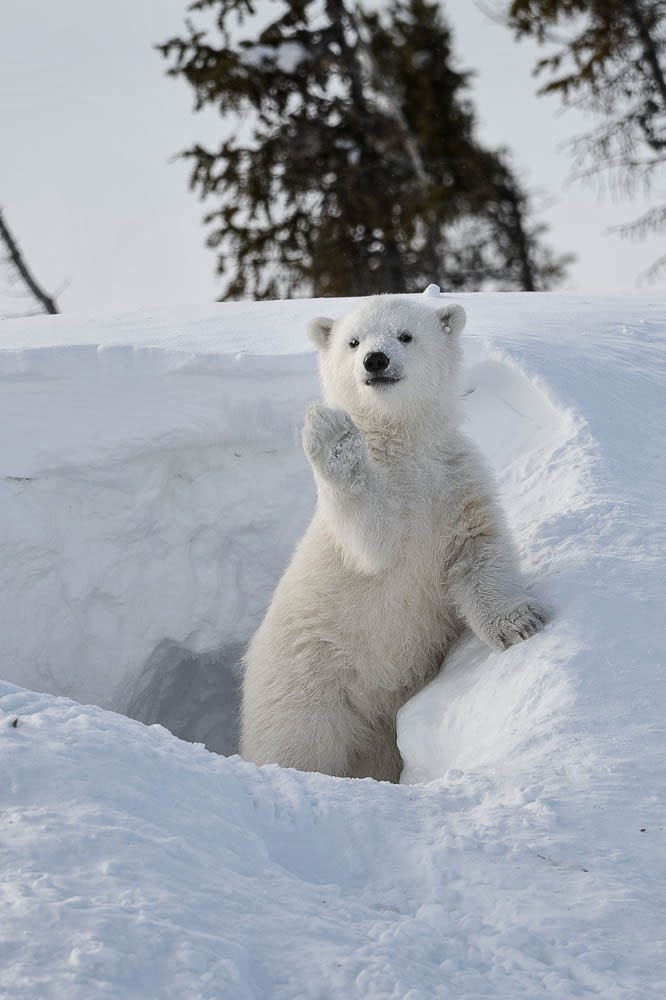 The vastness of the Wapusk National Park, only interrupted by small groups of trees along the many frozen lakes, the cold, the rough nature fascinate me again and again. The sunsets are spectacular and the icy winds sometimes brutal. "Our wilderness will touch you" is the slogan of the friendly people at the Wat'chee lodge. 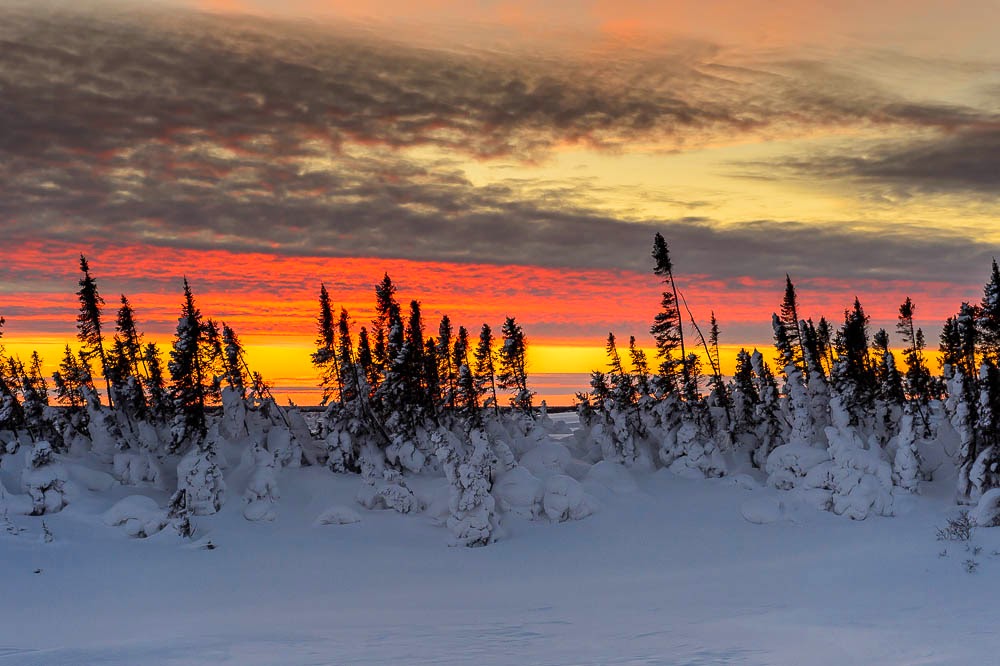