Pantanal: Land of the Jaguar

"He who kills with one leap," is the name of the Jaguar among the natives
To photograph jaguars can be quite difficult and fascinating at the same time. The world's third largest cat of prey is found only in the southern part of North America and in South America. It prefers dense vegetation and likes to keep up with rivers and lakes. Therefore, the chances of a sighting are particularly good in the "Pantanal". The "Pantanal" is a large tropical wetland and stretches over an area of approximately 230,000 square kilometers and is almost six times as large as Switzerland. It covers the south-west of Brazil as well as parts of Paraguay and Bolivia. The ecosystem is unique in the world and includes flooded areas, savannahs, forests, jungles and steppes. Every year the "Pantanal" is flooded by the waters of the Rio Paraguaí. Only the slightly higher areas remain dry and allow humans and ground-living animals to survive. In the autumn, the water slowly drains and leaves a fertile area with an incredibly rich flora and fauna.

From the Brazilian city of Cuiabà I reach the "Land of the Jaguars" via the "Transpantaneira", a 145 km long gravel road with 127, some simple wooden bridges. Reaching the end of the road, the journey goes on with a small motorboat to the "Jaguarflotel", a special "houseboat" with comfortable rooms, built especially for Jaguar observations . 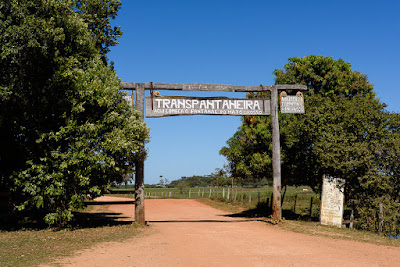 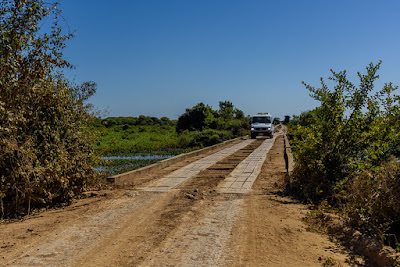 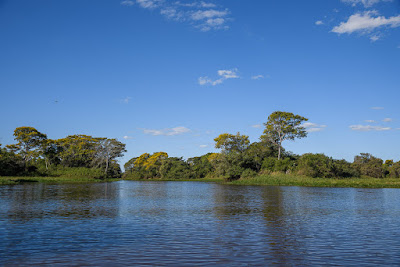 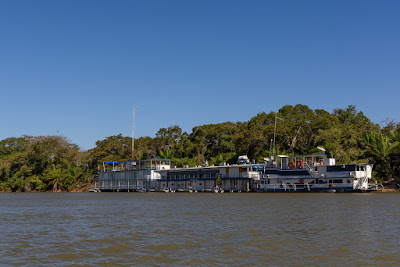 Jaguars are often seen along the riverbanks, as they like the water - but "often" has to be relativized. In the partly very dense undergrowth it is very difficult to see the animals and sometimes I spend hours on the river, until a call comes trough the radio, that a Jaguar was sighted - or we find one ourselves. Then, however, the boats drive with high speed to be first on the location. Jaguars are very good swimmers and often swim along the riverbank, always looking for prey. Prey consists of about 75% caimans and about 25% capybaras. 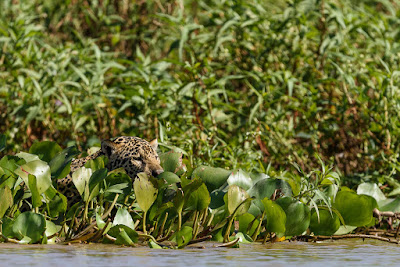 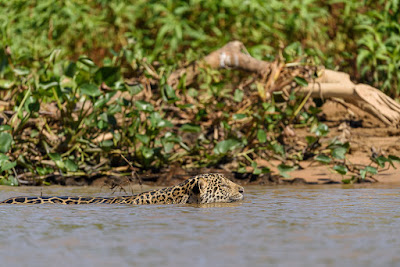 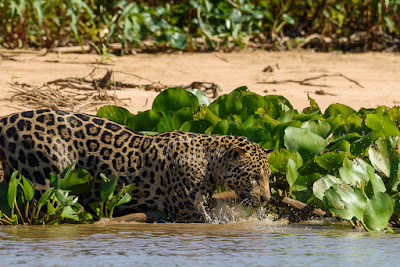 Giant otters live in lakes and slow-moving rivers. These, up to 2 meters long, sociable animals are day-active and can be observed well while they are fishing or sometimes even take a sunbath. I can witness an interesting interaction between Giant otters and a Jaguar, when the cat got near their den. The Jaguar gets mobbed away with a lot of activity and an unbelievable noise. But as soon as he gets up and hisses, the Giant otters dive - at least the less brave. Disturbed in his rest, the older male prefers to seek a quieter place. Nevertheless, the otter females bring their young to a safe place. 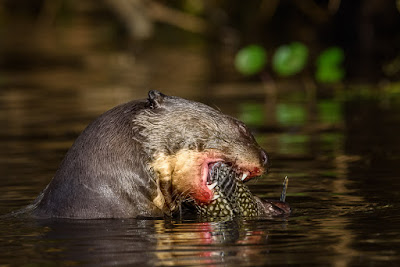 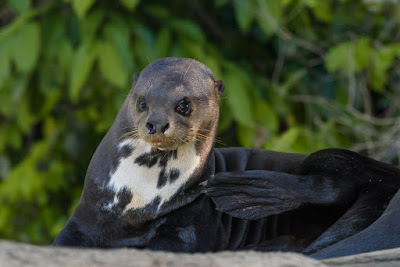 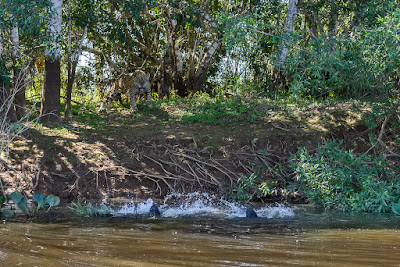 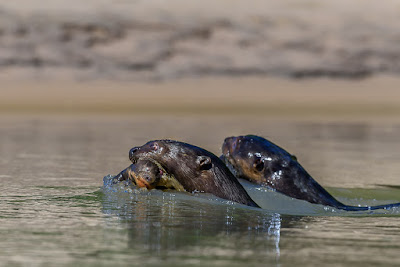 Normally, Jaguars are loners and meet only during the mating season. I am lucky to observe a nice encounter, when two "half-sisters" of different age meet. The cat in the first image is extremely tense when she perceives the scent of another animal. But then relaxes when she realizes it is her "half-sister". A very special viewing in the last light of the sun. 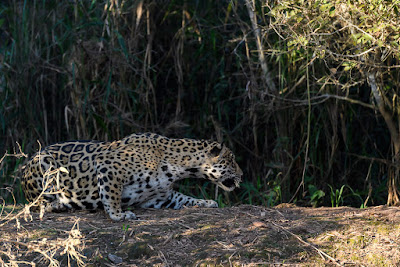 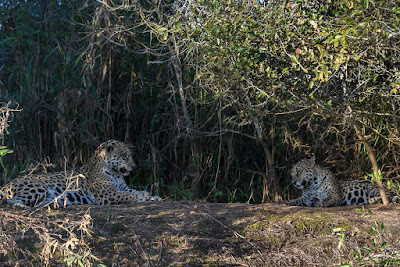 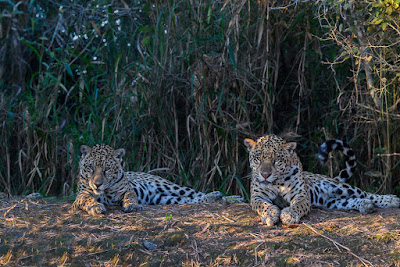 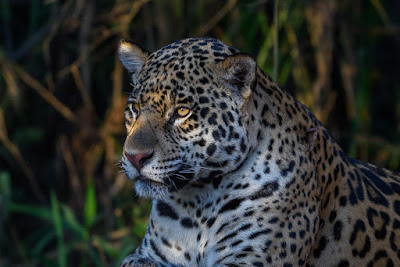 Besides wild cats and giant otters, the Pantanal offers beautiful riverbank sceneries, especially with the yellow blooming Cambara trees. But also the Capybaras and the many Caimans, warming up on the bank or swallowing a huge fish, are always nice motifs. The variety of the birds is huge - below two large specimens from the large diversity: a King vulture and a Great black hawk. 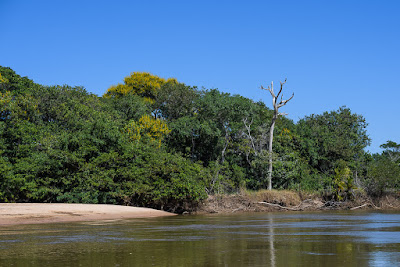 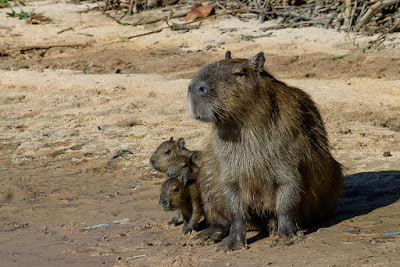 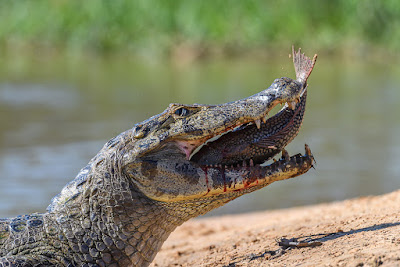 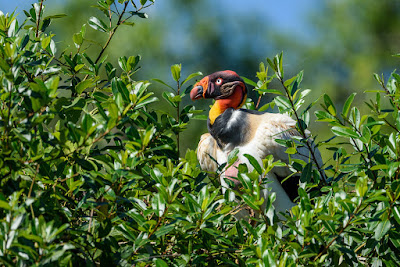 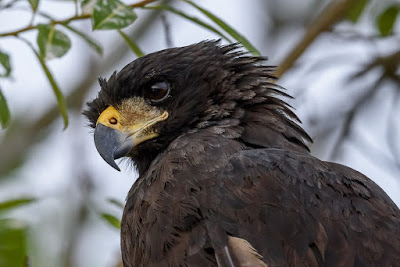 In "Jaguarland", I am of course mainly focused on the Jaguars. But the Pantanal offers much more! In the next blog, which is coming soon, I will report about the beauty of the Southern Pantanal. For the third time in a row, I spent some time at the Fazenda Barranco Alto. It must be very beautiful that I return again and again - it is very beautiful!