Galapagos - a paradise in the Pacific

In the footsteps of Charles Darwin
Although the Galapagos Islands were a long time on my «to do list», I have always been reluctant to visit the natural paradise Galapagos. «Too many tourists, restricted freedom of movement and so on» have deterred me. About a year ago I have, despite these limitations, made the decision to visit this animal paradise nevertheless - and did not regret it!

Although the variety of animals is not very wide, the uniqueness and especially the confidingness of the animals is very impressive. Particularly impressive in the bird life are the «blue-footed boobies» which delight not only potential mates with their blue feet and their dances but also the visitors. The Galapagos albatross breeds only on Española while frigate birds can be found on different islands. They are primarily distinguished by their red gular pouch, which they inflate during the breeding season to attract females. The large cactus finch belongs to the group of Darwin's finches on which Charles Darwins «Theory of evolution» is based. 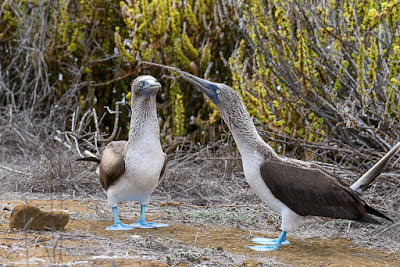 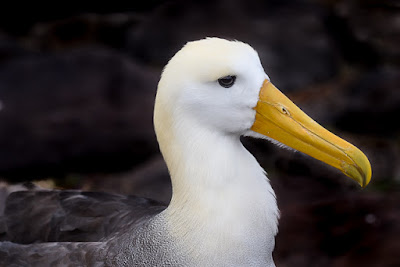 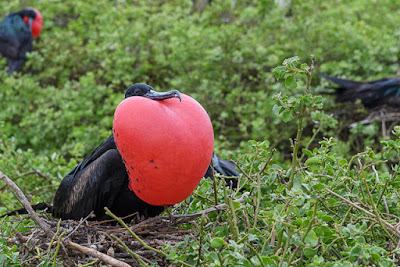 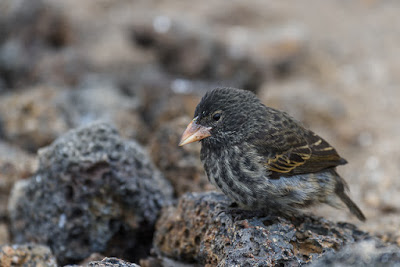 One gets reminded to prehistoric times when observing the iguanas and the giant tortoises. The land iguanas and marine iguanas are endemic to the Galapagos Islands. While the land iguanas stand out by their intense yellow color and feed on low-growing plants and shrubs, as well as fallen fruits and cactus pads, the marine iguanas feed only on algae in the sea. Since they need to reheat quickly at the sun after their dives, they are mostly black with some colors. The giant tortoises were once «living supplies» of sailors and were therefore threatened with extinction. 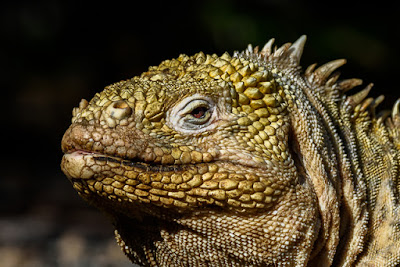 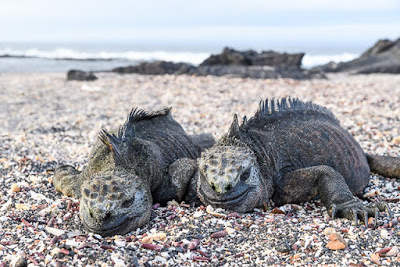 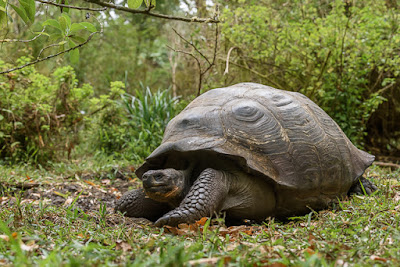 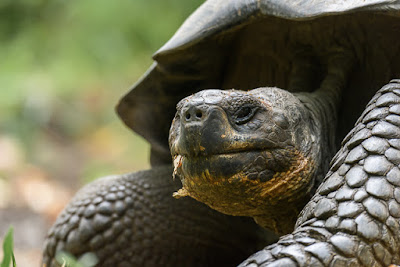 The Galapagos sea lions are eared seals and indigenous to Galapagos. They are very tame and can usually be seen at close distance. Mostly they scoot on their bellies while on land, but they can rotate their hind flippers under the body allowing them to walk "on all fours". If two males get too close, they can very clearly manifest it with their teeth and a loud roar. 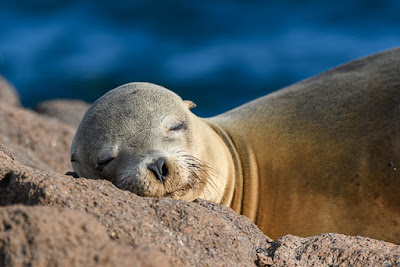 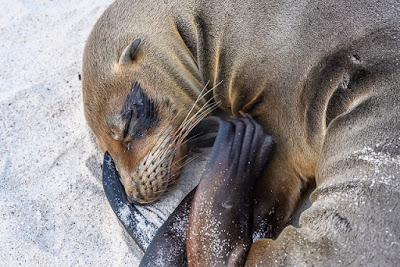 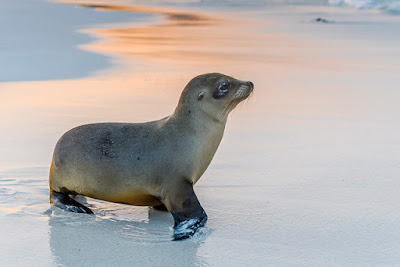 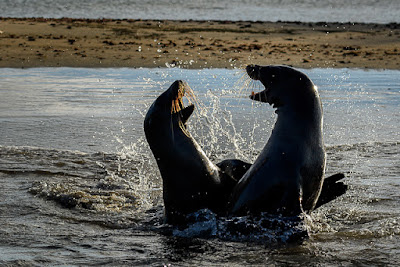 A unique experience is snorkelling. Besides marveling at the amazing world beneath the waves there are spectacular encounters with sea turtles, sea iguanas and sea lions. Even hammerheads and big Galapagos sharks can be observed. Unfortunately, the water is, due to the strong surf, often a bit murky. 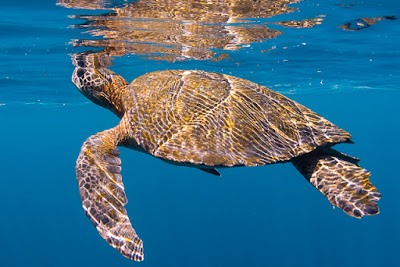 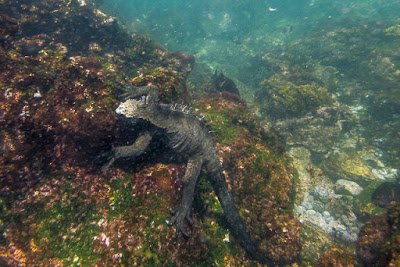 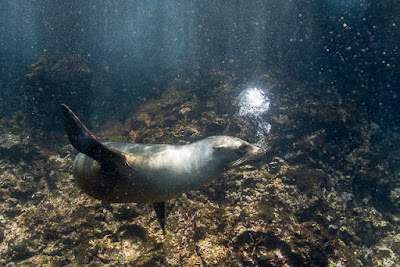 The blue-footed boobies move sometimes a bit «foolish» on land. In the air however they are true acrobats. They plunge dive from 15 to 30 meters height, by folding their wings aerodynamically to the body like a torpedo, and hit the water surface with up to 80 km/h. They usually swallow the prey while still underwater. 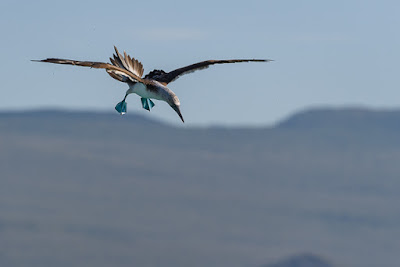 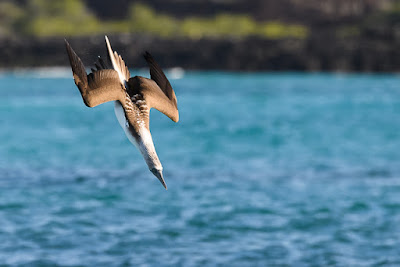 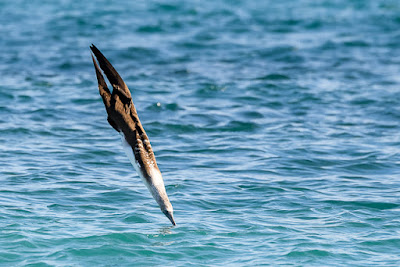 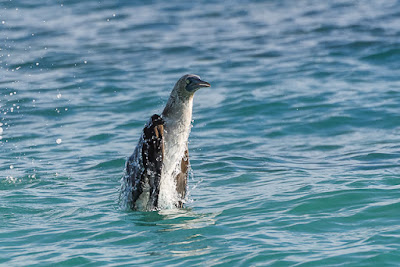 Both, sunrises and and sunsets are dramatically beautiful. The Galapagos penguin is extremely vulnerable in its continued existence. Here he shows up on a lonely rock, amid the raging surf. The turquoise-colored sea on the beach is illuminated by a "burning sky" and lets the colors appear in finest pastel shades. But the pelican, approaching a landingplace in the last light, challenges the technical features of the camera. 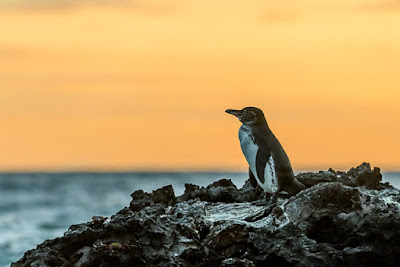 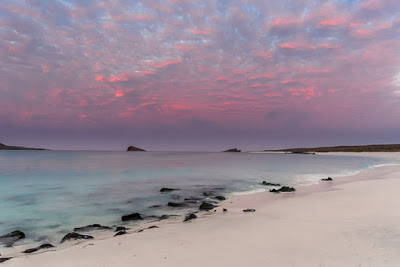 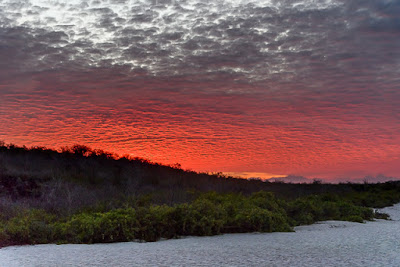 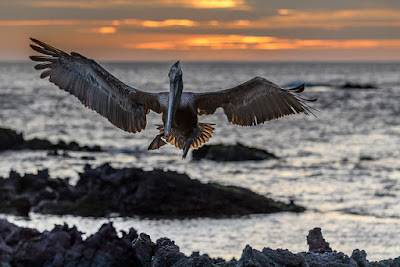 Galapagos is a fascinating destination. With a Yacht and Zodiacs it is possible to reach secluded coves and through coordination of the various providers, the impact by tourist is reduced to absolutely tolerable limits. Freedom of movement is in fact limited and you have to stay on the marked paths. But due to the high confidingness of the animals, they come very close to these paths and exciting encounters are possible. A visit is highly recommended.

More images can be found here:
Galapagos
Posted by Rudolf Hug at 1:42 PM